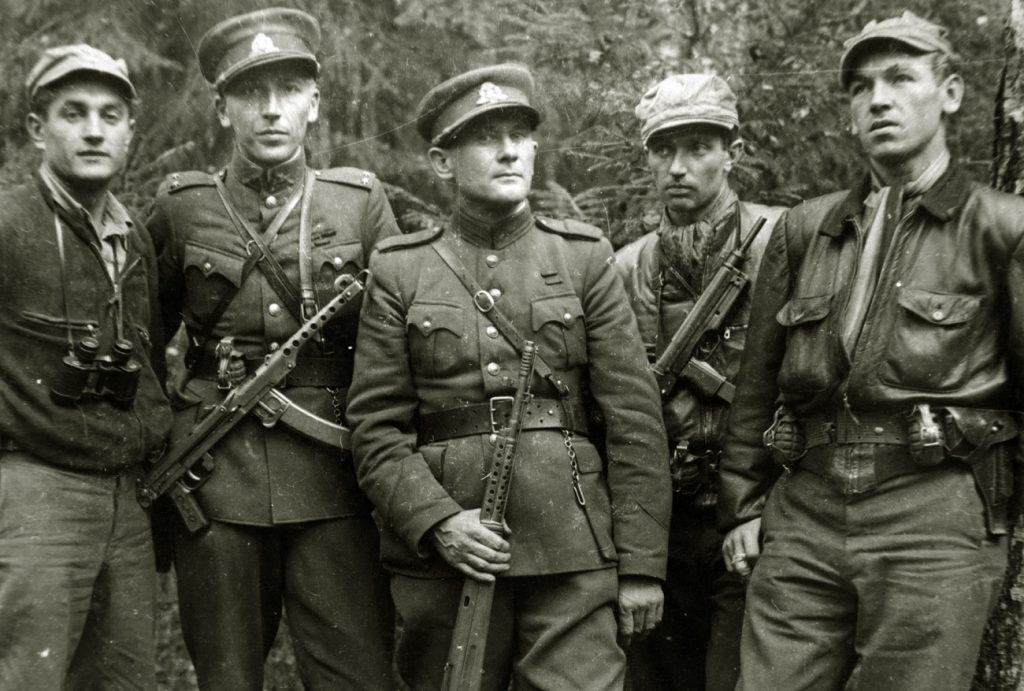 In war, there are two means of ending the fighting, either in one’s own favour, or to one’s disadvantage: a negotiated settlement, or an unconditional surrender. In order to achieve this, a decision needs to be made early, based on available capabilities, which of these will be sought. The result of this decision will dictate the approach taken by each party. The side which possesses material and/or numerical advantage will tend to seek the unconditional surrender of their enemy through a war of annihilation – hoping to disarm them completely. The weaker party, however, will seek a more limited war – which seeks to generate a negotiated settlement through putting the enemy in a position where the costs of continuing the war are so unpalatable that the negotiated demands of the enemy are preferable. Therefore, while the materially weaker party finds its weakness rather obviously in the lack of force, the stronger will often find its weakness in morale damage caused by the potential losses of continued fighting. This is, on the assumption of all other things being equal, it should be said, because the availability of force multipliers such as favourable geography, or technological advantage would constitute a material factor in determining which side is the stronger of the two.

This morale discrepancy arises from two primary sources: firstly that – for the stronger party, there will often be more geopolitical opponents waiting on the peripheries which would require consideration, or even smaller powers which will gain the chance to increase their own power through intervention; should the forces of the stronger power be reduced too much by the exertions of war, or a particularly disastrous battle. Secondly, by the very nature of the discrepancy, it is far easier to motivate a population and an army against a larger foe, which can more legitimately be portrayed as tyrannizing the smaller nation, and posing an existential threat. The inverse is also true, that all other things being equal, a population will tend to question their cause more if the nation being conquered is obviously weaker. This is cumulative with the fact that smaller combatants will tend to level much more reasonable terms for peace, and due to the previously mentioned tendencies towards waging warfare on the morale front primarily, they will also often tend to make efforts to preserve their own morale as well.

It is imperative that within this context, the strategic leadership of all levels is aware of the strategic direction being pursued, particularly between civilian and military authorities. This is because distinct policies or methods may exist for each strategy, with measures such as civilian priming for a drawn-out war being counter-productive if a state is attempting a short war with limited aims. It should be added that this applies in the case of both the weaker, and the stronger nations, as is the case when one army is defeated and functionally at the mercy of the other. Although this point will vary from case to case, it will typically be such that a limited set of war aims might encourage the army to be allowed to flee is disarray, while the war of unlimited aims would seek to destroy the army totally. This is because the cost of rearming the force, combined with the experience of having nearly – but not actually – lost the army, would make soldiers and civilians alike demoralised by the spectre of loss. If they are destroyed however, there is a risk that it would strengthen the morale of the nation suffering the loss, because the cost has already been absorbed, thus they will be resigned to it, rather than fearful of it. So too would it create a sense that to end the war now would be to have lost those lives for nothing when the option existed to continue, as well as realistically increasing the intensity of the threat. Therefore, should a small nation succeed in such a maneuver, it may actually strengthen the resolve of the larger one, placing them further from achieving their strategic goals.

The most prominent examples of this are the Confederacy during the American Civil War, more or less any guerilla war, the Irish War of Independence, the Russo-Japanese war, and the Crimean War (to an extent). Most particularly in the case of the US Civil War, the actions of the Confederate Army of Northern Virginia can, and usually are seen as pursuing this goal of demoralising the Union public and civilian leadership into a settlement – by attacking areas with large population concentrations to maximise disruption, and targeting political symbols such as Washington DC. Conversely, the Union pursued a strategy of capability reduction, through measures such as the Anaconda Plan, and Sherman’s March to the Sea, both of which served to decisively reduce the stocks and flows of resources to the Confederacy, and thus their ability to wage war – until their ultimate capitulation resulting from their hopeless situation.

Likewise during the Vietnam war, the asymmetric availability of information, and requirements of conduct meant that the North Vietnam-aligned forces merely had to continue applying pressure, while enjoying the morale advantage afforded by suppression of their own news sources which might diminish morale, while the same does not apply on the US side – the media outlets had free reign. This contributed to the perception that the US was a malignant force in the region, and thus an immoral actor which ought to be opposed (to the end of capitulation to the demands of the North, in effect). The US meanwhile largely sought to create a favourable casualty ratio (particularly under Westmoreland), thus depriving them of their ability to keep forces in the field, however in doing so, morale was not taken into account; and so although the US was trading favourably in the material sense, the morale losses taken were disproportionately in-favour of the North Vietnamese-aligned forces. In the end this turned political will in the US away from continued involvement in the war.

In both of these cases however, there are foiling factors to this analysis – it should be noted. The strategy of the Confederacy was not solely devoted to the morale-diminishment strategy, as the aid of European powers was also sought via the ‘King Cotton’ stratagem which would have given the Confederacy at least implied parity/superiority of force in order to settle a treaty – or even outright intervention. While this strategy was unsuccessful in enlisting European aid, it did hurt the ability of the Confederacy to wage the war as it required, due to the stockpiling of cotton (which would otherwise be exported) while the blockade was not yet truly in force. This missed opportunity could have bolstered the reserves of supplies early in the war, and helped to empower the crucial early armies. The war did however, help to induce the Second French Intervention in Mexico – an overt move into the US sphere of influence while the Union was occupied with the US Civil War. Had these two forces been able to coalesce, the fear of demotion from their otherwise strong position might have persuaded even the more bellicose voices the Union to come to terms with the Union – for fear of both a diminishment of their position internationally, and a general expansion of the war into a more general affair which permits other countries to get involved without the public-relations damage of seeming to defend slavery (which is part of what forbade such intervention prior). This latter outcome would pose an existential threat to the US, as it would open the door to a European partition of the Union.

In the case of the Vietnam war, the analysis may not work as it is unclear how conscious the strategy was on the part of Northern Forces until it was in full swing and generating tangible results. It would still qualify as an emergent strategy under these circumstances, but it might put a question mark over the applicability of the strategy as a deliberately applied guide to action.

As a counterpoint to the Vietnam War, the similarly sized partisan groups of the Baltic countries (most notably the Forest Brothers) were successfully suppressed by the Soviet military due to a strategy of extreme supression, punitive punishments, and regulation of information. As such the partisans were given few avenues of achieving independence through a negotiated settlement, as the Soviets had no reservations about waging the war in as brutal of a fashion as they deemed it to require, and they lacked the material means to make the war sufficiently costly that a rational disentanglement could be sought. The Soviet-Afghan War was something of a reversal of these factors, which allowed them much more success than the Forest Brothers before them.

The Irish War of Independence is perhaps a better example of the strategy generating results for a materially weaker force – the IRA and affiliated forces. From the beginning it was undertaken predominantly as a guerilla war, taking advantage of the divided attention and precarious position of the British Empire in relation to its rivals. This is particularly true if the Easter Rising in 1916 is taken as a preliminary stage of the conflict before its second flaring up in 1919. The conflict primarily involved ambushes of patrols, and assassinations, which clearly had no hope of reducing the British Empire to a state where it could no longer protect its interests, but made it unwilling to do so for the sake of a costly and relatively unimportant but troublesome province, at a time when it was important to give attention to matters elsewhere such as the Greco-Turkish War, the Russian Civil War, and the Polish-Soviet War, all of which had the potential to damage British geopolitical interests much more (should they be resolved unfavourably) – than the loss of direct control over Ireland. As a result, Britain’s willingness to continue the fight abated first, and terms were agreed.

In the cases of both the Russo-Japanese War, and the Crimean War, the totality of the resources available to Russia, particularly manpower, overshadowed those of their rivals (though more dubiously so in the case of the Crimean War). Japan in particular could not hope to match the reserves of manpower, or war material available to Russia if it came to total war. Instead then, in both cases a series of short sharp blows were delivered, which made continuing the war a highly expensive prospect, and one which might contribute to a destabilisation of the domestic political situation (as eventually did take place during the First World War). Therefore, despite not having disarmed the Russian state, it is brought into highly disadvantageous negotiations by the erosion of its will to continue the fight. As an aside, with the exception of the Mongol Invasion, this has been the only way that a conventional offensive war against Russia has been conducted successfully. Although, as per a previous essay, if we consider unilateral government replacement, then there are other successful examples and methods.

In conclusion then, for a smaller power attacking a larger one, in material terms, it is often necessary to maintain a morale advantage, and use this to attack the enemy, as it is often the weaker link in a strong nation’s ability to wage war. Existing internal divisions can be weaponised, as can the precariousness of relationships with existing international rivals. For both parties it is necessary to have all strategic parties made aware of the strategy, as decisions may otherwise be made which would compromise the overall strategy, either weakening one’s own morale, or strengthening the enemy’s. For the stronger power then, it is important to focus on morale in a defensive capacity, through information control primarily, but also demonstrating to the opposing force that continued resistance would only deteriorate their negotiating position, and do everything possible to extinguish the hope of an improved situation by isolating them from potential allies, and removing capabilities. Under these circumstances, a generous offer such as amnesty for all combatants will often be accepted.