Who Lost the 2020 Armenia-Azerbaijani War? 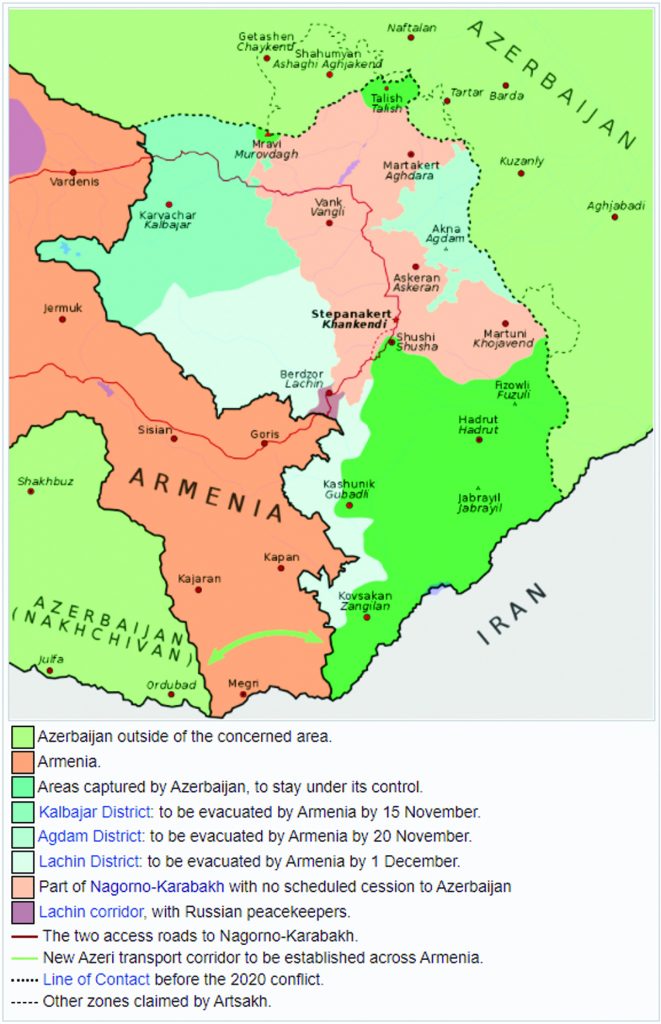 To explain the nuance of the above question; clearly the Armenians have lost the war, and while there have begun to be breakdowns of what exactly happened, which I will shortly summarise, the question remains: whose fault was it?

Armenia had world opinion largely on its side, the advantage of defence, the mountainous terrain advantage, and 26 years to prepare for what – in retrospect – seems inevitable. To their credit, the Azeris seem to have fought quite well overall, and made effective use of new drone technologies, existing stocks of weaponry, specialised troops (mountaineers particularly), and perhaps most importantly; effective leadership and long-term planning. Nonetheless, it appears that this is a war primarily lost by Armenia on the diplomatic and political front, because that is what provided Azerbaijan with the opportunity. Armenia is a member of the CSTO, a Eurasian mutual defence pact, and effectively Russia’s answer to NATO, yet Russia failed to join the conflict, despite treaty stipulations that suggest they ought to have. In 2013, the commander of the Russian 102nd military base in Armenia gave a statement that: “If Azerbaijan decides to restore jurisdiction over Nagorno-Karabakh by force, the [Russian] military base may join in the armed conflict in accordance with the Russian Federation’s obligations within the framework of the Collective Security Treaty Organization.” The word ‘may’ could be considered relevant here in light of the fact that they opted not to, but the spirit of the message is that they would do so, what happened between then and now? A revolution of course!

In 2018, protests and civil disobedience broke out in response to the reelection of the Prime Minister, eventually generating another election wherein the traditional ruling party did not even field a candidate, and has been subsequently removed from power entirely. Despite this move being tentatively welcomed by Russia, and the new revolutionary government claiming to have no interest in distancing themselves from Russia diplomatically, it seems that their actions have been telling a different story. Russian advisors have either been removed, as have personnel with close ties to Russia, both diplomatically and militarily – meaning that officers that trained in Russia were either removed or sidelined. Being that Russia is Armenia’s only major ally, this represented a significant loss of expertise in the use of integrated equipment, and a loss of experience and institutional memory. There was no replacements for these losses, and all the while, Azerbaijan was fostering greater relations with Russia, Turkey, and Israel particularly, but certainly not burning any bridges. So we have a framework for poor leadership, disastrous diplomacy, and haphazard use of equipment setting up the loss. Armenian actions seem to have been mostly reactive, and lacking in doctrinal sophistication, while equipment was scarce for Armenia, and insufficiently used. Azerbaijan were able to take the initiative after some early setbacks – learning from their mistakes, and breaking the brittle defences, which the Armenians had no hope of regaining in the short term. This is all to say nothing of the manpower and quantitative equipment differences. So; upon whose shoulders can this be blamed?

The revolutionary government stands out immediately as the prime suspect, because clearly many of the leadership faults, and the purge can be blamed on them particularly. However, the “Velvet Revolution”, it must be said, has many of the tell-tale signs of being at the very least, significantly influenced by US groups and interests. The Armenian lobby in the US is famously strong, and they contributed significant funds as a community during the war to support Armenia, but if the intention was to bring Armenia out of the sphere of Russia, and into that of the US – then it appears to have only damaging effects. To clarify, the method of applying pressure to an existing government through NGOs and organised mass civil disobedience – was the general structure of all of the revolutions of the Arab Spring movement. In particular, Tunisia, Libya, Egypt, Lebanon, and Syria. In the case of Egypt and Tunisia particularly, it is an open secret that US interests played significant roles in the organisation of the revolutions. It is worth noting however that the 2018 Velvet Revolution did not occur within the same period as the rest of these, and so if they all were part of some coordinated plan, then Armenia seems to fall outside of the purview of it. So is the US to blame?

As alluded to previously, the US is not a single player in this regard, and so different groups will have different interests, and act accordingly – perhaps even in ways that are contradictory or conflicting. If NGOs and informal networks within the US were supporting the dissident movement in Armenia, then it has no particular place in US foreign policy as far as the government is concerned. In responding to it however they were more than happy to ‘assert the sovereignty of Armenia’, which in practice means cooling of relations with Russia; portrayed to all as an anti-corruption crackdown by removing individuals associated with the previous puppet regime. All of this is made more likely by the status of the Armenia diaspora’s traditional political ties with the Democrat party, who were out of power at the time of the revolution, and during a period of Russo-phobia in the US, particularly the Democrat party.

So, speculatively; a subgroup of US interests including Armenian diaspora elements supported a revolution against the pro-Russia government in Armenia. Why would the Armenians themselves get on board with it? Being that the previous governing party had governed solely since independence, it can easily be blamed for all of the problems in Armenia, and particularly the actions of the elites. With a great deal of perceived corruption present, and no doubt a great deal of actual corruption, along with the realpolitik considerations which have them functionally subservient to Russia on many issues. The dissidents could therefore claim support from both the Armenian right wishing to strengthen Armenian sovereignty, and the left for its promises of greater openness, democratic freedom, and a number of other low-level grievances. Of course, on top of all that, corruption is seldom popular to anyone other than the beneficiaries, so everyone is happy to oppose that point in particular. Being that this had such dramatic implications on the stability of the country in its precarious situation – open to attack at almost any time if the situation deteriorated enough, or even the perception of deterioration by the Azeris, then is it reasonable that all parties be expected to take this into account? To reiterate: is it reasonable that those either pushing for, or taking part in the revolution, be expected to take the foreign policy implications into account? The support – both from the people themselves, and the Armenian diaspora seems to suggest that the Artsakh issue is a very prominent and important one, but both seem to have pushed for the situation that made its defence untenable. Perhaps it is their fault if we assume they are rational actors who either prioritised domestic issues higher than foreign policy concerns, or miscalculated the danger, but I don’t think that’s a fair assumption.

Instead, I would point to the actions of the revolutionary government, which read like a game of brinksmanship with Russia – trying to gain both western (and particularly US) backing, while maintaining the good relations with Russia despite the obvious provocations. The pitch for involvement with the movement which was presented to the public seems to have been simplistic, and although ‘if something seems too good to be true – then it probably is’, one cannot blame the public too harshly for jumping on board with an exciting, well-funded and well-marketed movement which promises to solve their problems with no obvious or mentioned costs to the whole affair. Like a drug to which they are only-now feeling the after-effects and the low which follows the high. It remains to be seen whether they will double down, or turn away from this new revolutionary drug, replacing the government with something new, or simply reverting to what protected them from external threats. What most recognise in such situations however, is that the peddlers are more culpable than the addicts. Not all are in the government of course, but as with any revolution, a change of the governing apparatus and some of the political elites has inherent benefits to those new guard who fill the ranks. Regardless of whether the overall situation is better or worse for the country, it is usually better to be an incumbent elite in a diminished state, rather than an internal exile of a powerful state. No doubt the external players and supporters get some benefit from the whole affair also, but that matter is less clear. What is clear is that the blame ought to rest solely on the current revolutionary government, and those who gave support to it in its nascent state. They played with fire, and got the whole nation burned in the process.

https://www.macrotrends.net/countries/ARM/armenia/gdp-growth-rate (If the revolution was due to inequality or economic failure, they don’t seem to have received much for the change)